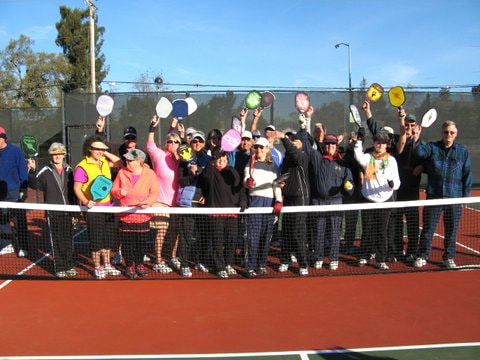 We don’t know exactly when pickleball was first played in Sonoma County. We do know that there were private courts in Sebastopol and Santa Rosa prior to 2011, but no public courts. In July 2011 Judy McCann appeared before the Santa Rosa City Council to promote the striping of pickleball courts, but that effort went unrewarded. However, in August 2011 Dena Lash persuaded the Town of Windsor to stripe 2 of their 4 tennis courts at Hiram Lewis Park for pickleball, and thus it all began. Weekday morning play started at Windsor. Arlene Knudsen, Charlotte Silviera, Kathy and Ken Kerst, who had all played pickleball previously, were recruited to start playing daily, offering instruction and proselytizing the benefits of pickleball. Dena’s friends Ron Drake and Rick Reisman started showing up. Sometimes we had three, sometimes we had six. Unfortunately, morning play at Windsor quickly ran into court use conflicts with Tuesday/Thursday tennis leagues. To solve this, Dena somehow managed to get two tennis courts striped for pickleball at Finley Park in Santa Rosa. In exchange for that, Santa Rosa Recreation and Parks asked that 6 weekend introductory clinics be offered Saturdays in September and October 2011, and that an ongoing commitment would be made to teach beginners, who could drop by on Tuesday and Thursday mornings and receive instruction. Those weekend clinics and daily morning drop-in play at Finley, as well Wednesday evening and Sunday morning play at Windsor, ended up netting Marlene Barri, Tricia Hoffman, Dale and Sandra Hartman, Norm and Diane Cleaver, Jim Helmer , Sandra Brust, Lanie Abrams, Bonnie and Kim, Judy McCann-Moon, Rene and Larry Stimach, Barry and Denise Weinert.

In late 2011/early 2012 Arlene, Charlotte, Kathy and Ken travelled to Petaluma to hold a Saturday pickleball demo for the Recreation Department. Pat Crabtree , who had been exposed to the sport by his brother in Arizona showed up, and Petaluma was on the Pickleball map. In no time at all Pat persuaded Petaluma to stripe 4 courts at Lucchesi Park and started drop-in sessions there. In June 2012 the first Wine Country Games Pickleball Tournament was held at the Windsor venue. Although there were less than 60 participants, the tournament raised local awareness about pickleball. More and more people started playing pickleball at Finley and Lucchesi.

In September 2013 the City of Santa Rosa, thanks to the efforts of Kelley Magnuson, Deputy Director, Santa Rosa Recreation and Parks, agreed to convert Finley tennis court #3 to four dedicated pickleball courts if the players could raise $10,00-$11,000 to pay for it. Tricia Hoffman took the lead in promoting the donation drive and the goal was reached within 4 weeks. The courts were ready for play on November 26, 2013. The number of players kept growing, thanks to the 5-year drought which kept the weather dry through the winter months so people could play outside. Intra-community tournaments/round robins started to develop with visits to Walnut Creek/Rossmoor, Ukiah and Heritage Hills. Also, as skills improved, players started going to tournaments in Arizona and Southern California, where pickleball was much more developed.

​The original impetus for growing pickleball was about health, fun, exercise and social interaction. In addition to drop-in play, outreach demos of pickleball were done in Monte Rio and Occidental. Scott Parisi and James Moore worked on youth pickleball in West County. With the increase in skilled players and an influx of tennis/racquetballers attracted by the improved competition an additional impetus arose, to improve playing skills. Coaches were solicited to visit and host clinics. Allen Christiansen, Doug Koch, Prem Carnot and Lisa Palcic all taught here. A “ladder” was started so players could hone their skills in recurring competition and was well received. A daily challenge court was established so advanced players could have more control over their court rotation. In spring of 2015 Adam Mackinnon administered 2 well-received round robin events, one for intermediate players and one for advanced. There was hope this would be repeated.

​In the summer of 2015 Finley court #4 was striped for multi-use, adding lines for 2 Pickleball courts, but in a way that most people did not like. Fortunately, however, the City, to everyone’s great surprise, converted one tennis court at Howarth Park to 4 dedicated pickleball courts. The summer of 2015 saw the largest numbers of players at Finley on a daily basis, some times 25-30, necessitating court sign up or “paddles on the fence” and long wait times. Carol McReynolds started afternoon drop-ins at Howarth,which alleviated some pressure. But wait times were still long at Finley and issues of fairness of court use increased, with advanced players needing more courts with more court time before rotation, and intermediate players feeling shut out of opportunities to improve their skills against the advanced players. Things came to a head and the advanced players moved their morning sessions to Howarth.

​Since that time pickleball has continued to grow. Bill Petrie re-instituted indoor sessions at Callinan Center in Rohnert Park, and was instrumental in getting 6 outdoor courts approved for Sunrise Park. Carol started a Facebook Group for Sonoma County Pickleball. Oakmont’s efforts to build pickleball courts experienced tumult of Biblical magnitudes, but the courts are now on track. Players keep going to tournaments and winning. Adam and his sons are rocking the pickleball world. The court striping on Court 4 at Finley was redone to everyone’s satisfaction, making it possible to run 6 concurrent games. Concord has 14 new courts, Santa Cruz has 3 venues, Rocklin and Folsom host events frequently. Wine Country Games will be hosting the 7th annual tournament this summer, hopefully adding skill ratings divisions within the age brackets. Many players are hitting the road for the winter and fall tournament circuits. Also, unfortunately, we’re losing many dear friends and good players to Oregon, Colorado, Arizona and The Court In The Sky...

Updates:
2020 is COVID. Wine Country Games cancelled. On the plus side...:

In summer 2020 Bill Petrie's years of effort were finally rewarded with 6 courts at Sunrise Park ! And then he gets 6 more courts striped on the remaining 2 tennis courts because of the massive turnout !
Also Windsor received a grant for 4 new courts at Hiram Lewis Park. If the PB community can come up with about $25,000, the courts will be built in 2021.
​
Sonoma County Pickleball is now in a stage where the seeds of its efforts are on the wind, settling here and there and sprouting new pickleball growth.
​So here we are.
​Pickle On !